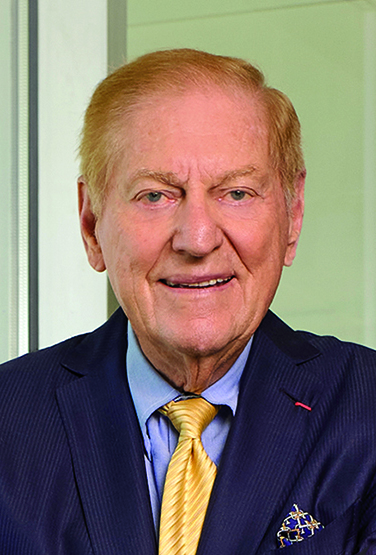 William J. Deutsch was born July 4, 1936 in New York City as one of four sons. He attended public high schools in Flushing N.Y., graduated New York University-Stern School of Business and entered the accounting profession in 1958. In 1961 he began his career in the wine industry, joining Gold Seal Vineyards in Hammondsport, N.Y., where he remained for 13 years, rising to the position of Vice President of Sales. Bill took his experience to Austin Nichols Co. in 1974 as Vice President of Sales-Imported Wines. In 1975 he formed the Somerset Wine Co., a subsidiary of Somerset Importers. As Executive Vice President at Somerset, Bill was responsible for all sales of the company and managed the import segment of the business.
Bill left his corporate job and founded W.J. Deutsch and Sons, Ltd. in 1981 with a vision of running a family-owned company that would import and market fine wines from family-owned producers around the world. Today that dream is a successful reality with the Stamford-headquartered company that has grown to include a prestigious roster of internationally renowned, award-winning wine and spirit brands serviced by over 300 employees. In 2009, W.J. Deutsch launched a spirits division, employing a team dedicated to building the company’s spirit brands into industry leaders. In May of 2012, the company changed its name to Deutsch Family Wine & Spirits and continues to be a family run organization, with Bill’s son Peter Deutsch serving as CEO. In the 40 years since the company’s inception, it has grown into the number one imported wine company in the U.S., selling over 12 million cases of wine and spirits per year
Deutsch’s position as the fifth largest wine company in the U.S., as well as being renowned for its brand building prowess and ability to identify and fill consumer niches within the wine category, has led to the company being one of the most well-respected importers in the industry. Under Deutsch’s direction, the company has built numerous category leaders including: the #1 Beaujolais brand in the U.S, the #1 imported brand in the U.S. and the #1 Australian brand in the U.S.,([ yellow tail ]), as well as America’s #1 most popular and fastest growing premium wine brand (Josh Cellars). Along the way, Bill Deutsch has won numerous industry accolades including Market Watch’s Industry Executive of the Year, Brandweek’s Marketer of the Year, Wine Enthusiast’s Importer of the Year, and Wine Spectator’s Distinguished Service Award. He is on the Board of Directors for the National Association of Beverage Importers Member Wine Committee, a founder and current Treasurer of the NY Chapter of the Compagnons du Beaujolais, a Médaille D’Honneur Comite National Des Vins De France, a Medal of Honor from the Mayor of Bordeaux, M. Alain Juppe; a Westchester County Family Business Award, and three Ordre National du Mérite Agricole honors. The Ordre National du Mérite Agricole is an order of merit established in France in 1883 to reward service to French agriculture. Bill was named Chevalier in 1986 by the French Government, promoted to Officier in 1992, and on November 3, 2011 Bill was promoted to the highest level of honor, Commandeur of the Ordre National du Mérite Agricole. Bill is believed to be the first individual from the tri-state area to have earned this distinction. On May 21, 2012 Bill received France’s prestigious Ordre National de la Légion d’Honneur, the highest French decoration for military or civilian service. The Légion d'Honneur is awarded only for gallantry in action or for twenty years of distinguished service in peacetime.
Deutsch largely attributes the company’s success to his unique "Six P's" model for building brands: People, Product, Package, Price, Promotion and Potential. The "P" of People always comes first. "We are a family-owned business working with other family-owned and/or people-oriented businesses," says Bill. "We develop strong, long term relationships with our producers and distributor partners, and we work together to achieve maximum results."
Today, The Deutsch family is proud to acknowledge the enduring relationships with their suppliers, many of whom have been part of the family since the business began, including wine from Australia: [ yellow tail ], [ yellow tail ] Bubbles; [ yellow tail ] Pure Bright; California: proprietary brands Josh Cellars, Josh Cellars Reserve; Joseph Carr, Bellacosa, Layer Cake; The Calling; France: Andre Lurton, Cave de Lugny, Fleurs de Prairie, Hob Nob Vineyards, Sauvion et Fils; Italy: Barone Fini, Villa Pozzi; New Zealand: The Crossings; Portugal: Quinta Do Vale Meao; Argentina: Clos de los Siete; and award-winning spirits including proprietary brand Redemption Whiskey (USA), Bib & Tucker Bourbon (USA), Gray Whale Gin (USA), Masterson's Rye (Canada) and Luksusowa Vodka (Poland).
Bill Deutsch currently resides in Riverside, CT with his wife Fran. They have three children and seven grandchildren. Bill serves on the Board of the Bruce Museum.