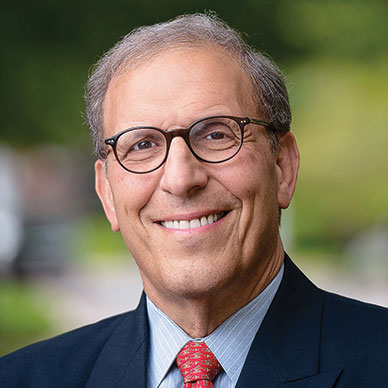 Leonard A. Schlesinger is Baker Foundation Professor at the Harvard Business School where he serves as Chair of the School’s Practice based faculty and Coordinator of the Required Curriculum Section Chairs.  He has served as a member of the HBS faculty from 1978 to 1985, 1988 to 1998 and 2013 to the present.  He has also served as head of the HBS Service Management Interest Group, Senior Associate Dean for External Relations, and Chair of the School’s (1993-94) MBA program review and redesign process.
Throughout his career Professor Schlesinger has transitioned between academic and managerial roles in education and business settings.  He served as President of Babson College from 2008-2013, held a number of key executive and operating positions (ending as Vice Chairman and Chief Operating Officer) at Limited Brands (now L Brands) from 1999-2007, was a Professor of Sociology and Public Policy and Senior Vice President and Counselor to the President at Brown University from 1998-1999, and was Executive Vice President and Chief Operating Officer at Au Bon Pain from 1985-1988.
Schlesinger currently serves as a Director of Viewpost LLC, Next Level Pizza, Inc., MassChallenge  and RH, Inc. (Chair of Compensation Committee), a Trustee of Wheaton College (MA) (Chair of the Finance and Facilities Committee), and a member of the President’s Council of the Franklin W. Olin College of Engineering.  He serves on the Advisory Boards of The College for Social Innovation and Datapoint Capital.  He also serves as an advisory council member of Goldman Sachs' 10,000 Small Businesses Initiative, and as a member of both the Council on Competitiveness and the Council on Foreign Relations.
Schlesinger holds a Doctor of Business Administration from Harvard Business School, an MBA from Columbia University, a Bachelor of Arts in American Civilization from Brown University and an Honorary Doctor of Laws from Babson College.