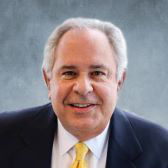 Mr. Benjamin serves as the Vice Chairman of the Board and Chief Administrative Officer of GreenSky, Inc. (NASDAQ: GSKY), a leading point-of-sale consumer finance and payments technology company.
Mr. Benjamin has 35 years of operating, investment banking, corporate finance advisory, principal investing and restructuring experience. Additionally, Mr. Benjamin serves as the Managing Partner of MOG Lodging Investors, LLC, a developer and operator of Southeastern US based Marriott licensed limited-service hotels and is the co-founder and Chairman of the Board of The CPA Wealth Advisors, LLC, a producer of a personal financial and retirement planning radio show syndicated and delivered weekly in select markets nationally.
Mr. Benjamin formerly served as the Managing Partner of Atlanta Equity Investors, LLC (“AEQ”), a middle market private equity firm. Prior to co-founding AEQ in 2007, Mr. Benjamin served as a Managing Director with Navigant Capital Advisors, LLC (“NCA”), the Corporate Finance practice group of Navigant Consulting Inc. (NYSE: NCI), where he directed the activities of NCA’s Investment Banking Practice nationally, along with leading the group’s Private Equity advisory activities. In 1999 Mr. Benjamin co-founded and served as a Senior Managing Director of Casas, Benjamin & White, LLC (“CBW”), a leading national restructuring and mergers & acquisitions advisory firm acquired by Navigant Consulting in 2005. Prior to co-founding CBW, Mr. Benjamin served as the co-founder and Chief Executive Officer of Premier Healthcare, Inc. (“PHC”), a leading health care services venture management and development firm formed in partnership with Edison, NJ based Healthcare Investment Corporation. Prior to co-founding PHC in 1991, Mr. Benjamin served as the Managing Partner of Williams, Benjamin, Benator & Libby, a 75-person certified public accounting firm which Mr. Benjamin co-founded in 1981. Mr. Benjamin began his professional career as a senior accountant in the Atlanta office of Ernst &Young.
In additional to serving as a past board member of numerous publicly traded and not-for-profit entities, Mr. Benjamin currently serves on the Board of Trustees and the Executive Committee of The Woodward Academy, a member of the Dean’s Advisory Council at The Gatton College of Business & Economics at the University of Kentucky and serves as the current President of Ahavath Achim Synagogue in Atlanta, GA. Mr. Benjamin is a past Annual Campaign Chair and Chairman of The Board of Trustees of The Jewish Federation of Greater Atlanta, as well as the past Chairman of the Board of the USCJ Endowment Foundation.
A native of Cleveland, Ohio, Mr. Benjamin, a CPA and a Registered Investment Advisor, attended the University of Kentucky on a full tuition music scholarship, receiving a Bachelor of Science degree in accounting (Lexington, 1979), where he was named a Coopers & Lybrand Scholar. Gerry, along with his wife of 38 years, Vicki, are the proud parents of a grown daughter and son, ages 28 and 25, respectively,who, along with Gerry and their son-in law, will each be attending graduate school next year. Gerry could have never imagined that, at age 64, he would be funding $320,000 of graduate school tuition in 2022.