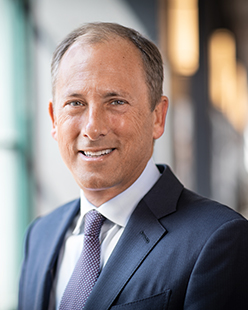 J. David Heller is the President, CEO and Cofounder of The NRP Group. Over the past 25 years, he helped create one of the largest multifamily development companies in the U.S. Since its founding in 1994, The NRP Group has developed more than 42,000 apartment homes and currently manages over 23,000 residential units across the nation. The NRP Group has been named the 2020 NMHC #6 Top Multifamily Builder in the U.S. and #7 Top Multifamily Developer, and Affordable Housing Finance has named The NRP Group #4 Top Affordable Housing Developer and #12 Top Owner in the U.S. The NRP Group is a three-time recipient of the National Association of Builders Multifamily (NAHB) Pillars of the Industry award for national “Development Firm of the Year,” and has become the top multifamily developer in the U.S. that creates both affordable and market rate housing at national scale.
Prior to founding The NRP Group, Heller worked as a consultant for The Townsend Group where he was responsible for more than $3.6 billion in real estate investments over two years. Developments included office, industrial, retail, single family and multifamily construction projects. Additionally, he was responsible for portfolio diversification, asset management, investment strategy and project underwriting. His clients included the State of Washington, the City of Milwaukee, United Mine Workers of America, Ohio Police and Fire, Los Angeles Police and Fire, and the City and County of San Francisco.
Heller then spent five years at Arthur Andersen & Co. in Chicago as a manager in the real estate consulting division. He performed feasibility studies and market analysis, created strategic plans and audited real estate partnerships for clients, including LaSalle Partners, VMS Realty Partners, First Chicago and RREEF Funds.
A certified public accountant, Heller is a member of the AICPA. In addition, he serves on the executive committee and is past Chairman of the Housing Credit Group for the National Association of Home Builders. Heller serves on the advisory board for the Campaign for Affordable Housing and the editorial advisory board for Affordable Housing Finance magazine. He also serves as a board officer for Cleveland Neighborhood Progress, Gordon Square Arts District and the Housing Advisory Group. In 2010, Ernst & Young Cleveland recognized him as “Entrepreneur of the Year.”
Heller is deeply committed to community service and holds several leadership positions across many civic organizations. In January 2009, the President of the United States appointed him as a member of the United States Holocaust Memorial Council. In addition, he serves on the advisory board of the University Hospitals Harrington Heart & Vascular Institute. He joined the Ohio Police and Fire Pension Fund Board in 2008 and continued to serve after the board reappointed him in 2012 and 2016. He also serves on the boards of the Parkwood Corporation, United Way of Greater Cleveland, American Jewish Joint Distribution Committee, and the Dean’s Advisory Board for the Ross School of Business at the University of Michigan.
Heller holds a bachelor’s degree in business administration from the University of Michigan. In 2017, the university’s Ross School of Business honored him with the David D. Alger Alumni Achievement Award that recognizes alumni who have brought distinction to themselves, credit to the school and benefit to their fellow citizens.
With a dedicated passion for education and higher learning, Heller contributes to several university boards including the board of directors for Northeast Ohio Medical University where he served as chairman. Since 2016, he has also served on the boards of Cuyahoga Community College and the Cleveland State University Center for Population Dynamics.
Heller is greatly devoted to serving the Jewish community across Northeast Ohio. He has served on the Board of Trustees for Jewish Community Housing and Gross Schechter Day School. He was Board President of the Jewish Education Center of Cleveland, President of the Board of the Ohio Jewish Communities and he chaired the Government Relations Committee at the Jewish Federation of Cleveland. Following his role as Campaign Chair in 2013 and 2014, the Jewish Federation of Cleveland named Heller as Board Chair for the 2019-2022 term.