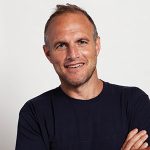 Cliff Chenfeld grew up in Columbus, Ohio, graduated from Ohio State and from the NYU School of Law.  He clerked for a federal judge and  was an associate at Sullivan & Cromwell.  After practicing law for almost 5 years, he co-founded  and was co-CEO of indie label/publisher Razor & Tie and Kidz Bop, the number 1 children’s audio brand in the United States. Chenfeld was the executive producer of a number of films including Joan Baez: How Sweet The Sound, Serious Moonlight and Concussion. In 2019, Chenfeld became a partner in the WonderStruck and Wonderbus Music Festivals, based in Ohio.  He is a member of the board of the Democratic Majority For Israel, among other groups.