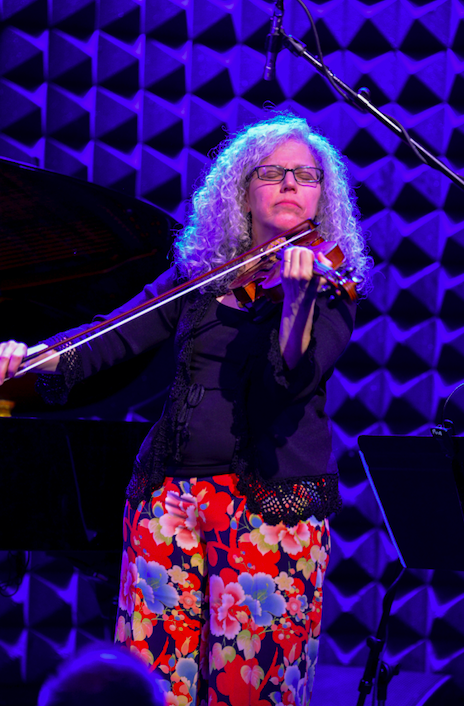 Klezmer fiddler and composer Alicia Svigals is a founder of the Grammy-winning Klezmatics, which she co-directed for seventeen years. She has written for violinist Itzhak Perlman, the Kronos Quartet, playwright Tony Kushner, documentary filmmaker Judith Helfand, singer/songwriters Debbie Friedman, Diane Birch et al, and has collaborated with them as a performer and improviser as well as with poet Allen Ginsburg, Robert Plant and Jimmy Page of Led Zeppelin, Gary Lucas and Najma Akhtar, and many others. She has appeared on David Letterman, MTV, Good Morning America, PBS' Great Performances, on NPR's Prairie Home Companion, Weekend Edition and New Sounds, and on the soundtrack for the L-Word. Her klezmer roots band, Alicia Svigals' Klezmer Fiddle Express, plays at festivals around the U.S. and the world: https://www.youtube.com/watch?v=j-sXLevOXrE.

Svigals was awarded the Foundation for Jewish Culture's annual New Jewish Music Network Music Commission for her original live score to the 1918 film the Yellow Ticket and a Trust for Mutual Understanding grant to bring that work to Poland. In 2018, Flicker Alley released a DVD of the 1923 film the Ancient Law with her live score written and performed with pianist Donald Sosin, and in 2020 followed that up with the 1924 film City without Jews. She is currently touring those project around the world, with major support from the Sunrise Foundation for Education and the Arts, and a new project is now launching, also funded by Sunrise; a restoration of Eleanor Antin's 1990's faux-silent film Man Without a World.

Svigals has been a fellow at LABA - a non-religious house of study and culture laboratory at the 14th St. Y in NYC which every year invites a group of artists to consider ancient texts and create work that pushes the boundaries of what Jewish art can be; while at LABA she composed a song cycle based on Yiddish poetry (samples here: http://www.labajournal.com/2014/07/seduction-in-eynaim-a-maternal-song-cycle/). In 2014 Svigals was an NEA Macdowell Fellow. In 2018, Svigals released Beregovski Suite, an album of music from a long-lost archive of klezmer melodies, arranged and performed with a contemporary spin with jazz pianist Uli Geissendoerfer. In 2019 she was named one of the “Algemeiner J100” by the - a list of significant contributors to Jewish life and culture. In 2019 she was also named a Finalist for the NYSCA/NYFA Artist Fellowship in the category of Folk/Traditional Arts.